Is Your Radiology Practice Prepared for Gen Z?

Harry went on vacation with his family, and ended up in the doctor’s office.

While out on an excursion, the adventurous 13-year-old fell and hurt his leg, leaving him unable to walk. Harry’s dad immediately used his cellphone to search for the nearest doctor’s office. Opting for the closest office with the best ratings, Harry’s dad brought him in to have the physician look at his leg. A few hours and an x-ray later, they returned to the hotel with a clear diagnosis: Harry fractured his leg and required a cast.

Instead of walking out with a CD copy of the x-ray, Harry’s parents left empty-handed. They had instead received a login to the physician’s Patient Access system where they could access the x-ray and physician’s report online. They could even share Harry’s scan with his pediatrician by emailing him a secure link to the actual file. In fact, before they were even back in town, Harry’s pediatrician saw the x-ray and suggested a follow up with a specialist due to the type of fracture, avoiding an unnecessary visit to the pediatrician’s office.

Harry’s parents, part of the millennial generation, are tech-savvy and their kids, members of Generation Z or "Gen Z", are even more so. In the next five years, Harry will be dealing with healthcare providers on his own and I can guarantee he would balk if the physician handed him a CD.

Is your office prepared for this next generation? In the U.S. alone, more than 65 million individuals make up Gen Z, and they will soon be the largest consumer population in the nation (let alone, the world). As the first true digital natives - they've never known the world without internet - they only know connectivity and online access. 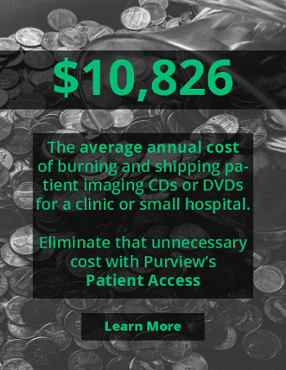 As an analysis from McKinsey and Company put it, this generation identifies consumerism as an individual identity, meaning they feel personally invested in any product or service they use. They demand control over their lives - including their healthcare. Providers better be ready to meet this demand.

Moving forward into the digital age, away from physical CDs and paper files, is a critical first step. Within just a few years, this vibrant, computer-savvy generation will make up the majority of your patient base, and they will expect digital access to their healthcare, from records to medical imaging. This move will save you money, too, as it eliminates the costs associated with burning CDs. Even a small practice that burns five CDs per day could end up spending as much as $30,000 annually by providing these “free” discs to their patients.

Prepare your practice for Gen Z by incorporating technology and services that meet their needs and preferences. Offering patients secure online access to their medical images is a great place to start. Adopting this image delivery method will save you money immediately and in the long run, as well as set you up for success in meeting the demands of your soon-to-be patients.