A concern we often hear from physicians who hesitate to adopt online imaging access is that their older patients won't be comfortable with digital healthcare tools. In reality, seniors are more engaged with digital devices than ever before thanks to the vast health, social, and safety benefits that these tools offer. An app will actually make it easier for your patients to keep track of their imaging and share their images with their healthcare provider team.

Seniors are increasingly embracing a digital lifestyle, according to a recent study from the Pew Research Center. The study found that about 91% of American seniors ages 65 and above owned a cell phone. Of those seniors, 53% used a smartphone compared to 39% who used a regular cell phone. Those statistics show that the chances are high that your older patients use smartphones in their daily life.

Older patients benefit significantly from having mobile access to their medical images. These patients likely have several physicians involved in their healthcare and having a way to easily share their imaging with this team from their smartphone saves them from the logistical nightmare of having to call your office and go through the steps of having their images transferred via CD. Additionally, having their imaging available through an app on their smartphone can be especially useful for patients who may be more prone to forgetfulness or memory loss. They no longer have to remember to bring their CD with them to an appointment, keep track of storing them, or locating the correct disc. They don't even have to remember a specific website URL or track down an email containing the link to their image; they can simply go directly to the app.

Overall, digital devices such as smartphones or tablets can play a key role in a patient's well-being as they age, especially for those who live at home in their later years. Seniors can use apps on these devices to help them remember where they parked, ensure that they take their medication on time, communicate with their doctor and receive severe weather alerts, in addition to accessing entertainment and social connection with their families and friends.

Health-related apps can also make healthcare and managing chronic health issues much simpler, more efficient and effective for the senior patient population. Many of your older patients most likely already use their smartphones to track their daily steps, nutrition and blood sugar levels. If older patients can manage these health-related apps, they can certainly manage an app to view and share their medical images.

What About the Silent Generation?

Adoption rates for older generations, especially Baby Boomers (individuals born between 1946 and 1964), have been growing rapidly in recent years. For example, Boomers are now far more likely to own a smartphone than they were in 2011 (68% now vs. 25% then). While the Silent Generation (individuals born in 1945 or earlier) remains slower to adopt new technology, that doesn’t mean they don’t use technology. Pew report shows four out of ten in this generation (40%) report owning a smartphone and 33% indicate that they have a tablet such as an iPad. 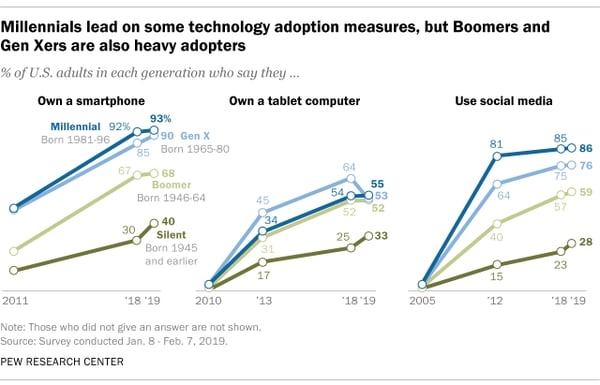 The oldest adults face unique barriers to adopting new technologies such as a lack of confidence in using these tools to physical challenges manipulating certain devices. These are important factors to keep in mind, but it doesn’t mean you should completely write off this age group from being digitally curious or competent. At a time when memory may be starting to fail and it becomes increasingly difficult to get around or handle logistics, having smartphone access can be a game-changer for simplifying the process of viewing and, most importantly, sharing their medical images.

In addition to mobile phones, the Pew study reports that roughly one-third of seniors owns a tablet. Accessing the app on these devices can be helpful to older patients who may experience physical limitations with a smartphone such as difficulty seeing or typing on the smaller screen. Of course, having online access through an internet browser is always an option, but an app will specifically enable your older patients to have simplified, direct access to their images on their smartphone or tablet.

Don’t make the mistake of assuming that your older patients won’t want the option to access their imaging online. If they prefer a CD, you can give them a CD. But you may be surprised to find that they are already familiar with a smartphone and tablet, and will appreciate the ease and peace of mind that comes with always having their imaging available to them. They may ask you to walk them through how to use it, but that's a courtesy every patient should get (and shouldn't take more than five minutes, far less time than the phone call to get a CD transferred will take). Having the ability to pull up or share their images when they need them will be one less part of their medical care that they will have to think or worry about. Who doesn't want that?