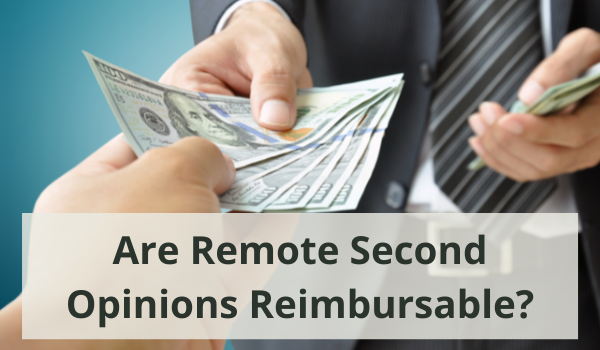 There is a growing list of hospitals adopting online or remote second opinions (RSOs). Second opinions, in general, are becoming more accepted by both patients and physicians, and telemedicine or remote medical encounters are becoming increasingly popular. This has led patients who are diagnosed with critical medical issues to seek ways to avail themselves of specialty medical knowledge and experience from providers that are not necessarily local to them.

The fees charged for remote second opinions vary greatly. A sampling of what you can find online is included in the table below. Note that all these fees don’t necessarily relate to exactly the same services and shouldn’t be used for price comparison. 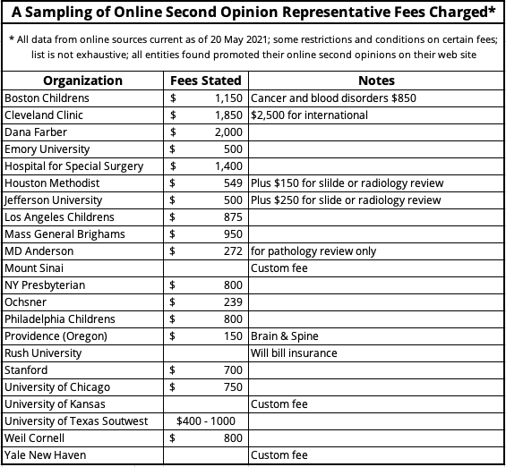 What is clear from the table is that most hospitals don’t expect the fees the patient pays for a second opinion will generate much in the way of profit. Instead, they have other motives. Hospitals that offer remote second opinions are focused on the "long game."

Often, patients with chronic illnesses develop a lifelong relationship with the hospital that offered them their remote second opinion.

Further, exposing the hospital’s deep specialized expertise via a remote second opinion is a great way to enhance a hospital’s brand. In the past, hospitals have not had the needed to market their services. However, in the new world of medical care, there are many competing resources nipping at the heels of the traditional hospital, increasing the need for more aggressive marketing activities.

Second opinions generally utilize the hospital’s most important and scarce asset – physician expertise in a particular subspecialty. It is important to ensure that this resource is used wisely. By focusing on a strategic goal of expanding the hospital’s overall reach, most hospitals are finding that remote second opinions are an important part of how hospitals can more effectively market their services.